Description: All two dollar national bank notes are rare and highly collectible. A large number “2” lies lazily (hence its nickname) at the top center-right of every bill. Great condition bills will almost always bring more money. If you want to sell your currency to us, we would love to talk.

Varieties: National banknotes can have numerous small differences that have the potential of impacting the value in a positive way. Some national currencies have red serial numbers while others have blue.

Sometimes national banknote collectors will target specific President and Cashier signatures on these notes. This isn’t a common thing but if a certain signer had an interesting history and the collector collects banknotes signed by that person, it can definitely impact the value in a positive way.

It’s also important to know these signatures can be faded or completely missing. This can be caused for different reasons but the most common reason would be environmental damage or if the note has been chemically altered or cleaned.

As stated earlier, the note pictured above is a $2 national with the red scalloped seal. This means the bill was printed 1875 or later. You’ll also notice these scalloped seal nationals have an extra red overprint on them that says “Series 1875” which is another way to distinguish between the two varieties.

Also, keep in mind, some two-dollar national bills simply don’t have a charter number (see the first photo on this page). This does not impact value positively or negatively. 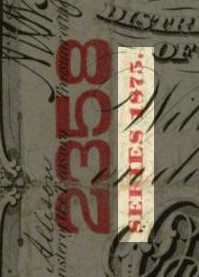 Value: When it comes to finding the value of $2 national banknotes it really comes down to a few factors. The main thing is which state the banknote was issued for. After that, serial number, market, and condition respectively. In some instances, a note will be worth $250, in others, $30,000. You should contact a paper money expert before trying to sell your national bank note.