We love adding new pieces of national currency to our collection all the time. National banknotes can be incredibly valuable dependent upon numerous variables. We have information listed below, but the lowest denomination printed was the $1 and the highest being the $1,000 bill. Typically speaking, the higher the denomination and the better its condition, the more money it will be worth.

When it comes to selling your national currency its important to fully understand exactly what you’re dealing with. Some denominations are common, like the $5, $10 and $20. While others, like the $100, $500, and $1,000 are all considered difficult to acquire, especially depending on the specific bank.

Click the denominations below for more information regarding a specific denomination. Below that is a short summary of national bank notes, their dates, values, and history. 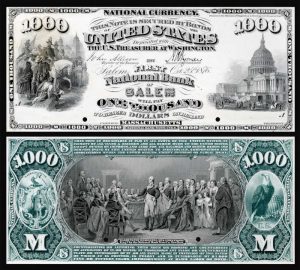 Other extremely scarce or unknown examples can bring tens of thousands, if not over $100,000. It really all depends on the factors which determine the value below.

Factors for Value of National currency:

The first type of national ever printed was called first charters. It’s important to know these notes were printed from 1862 to 1881. You can determine the first charter because of their unique design and they are dated 1875, or earlier. These are my personal favorites due to their beautiful designs. (see pictures below!)

The first type of national currency ever printed was called the first charter national bank notes, shortly followed by the very similar looking original series banknotes. Each denomination from this series depicted something different with a vignette. The $10 were special and some of my favorites because of their depiction. The BEP engraved the vignette Franklin and Electricity (circa. 1860) on ten dollar national banknotes from the 1860s to 1890s.

The second type of notes from the series are dated 1882. These national banknotes come in 3 different types: brown seal, date back and value back. These are pretty self-explanatory but the brown seal notes have a brown seal, the date back bills have the dates on the back and the value back has the denomination of the bill on the back. These can be incredibly rare depending on which issuing bank your national is from. We’ve paid as little as $50 for a common, low grade example and as much as $30,000 for a high grade rare national example. It really depends, contact us today to learn more about how rare your national banknote is.

The third type of national banknote comes in two colors and many different denominations. All of these national banknotes were printed for the series of 1902 and either come with blue or red seals. The red seal variety will almost always be worth more than the blue type. This is because less were printed and there is a large collector base for them. They can be incredibly valuable if the red seal national is from a scarce bank.

Blue seal national banknotes can also be very collectible and valuable if its from a rare bank. But on average, the likelihood of a red seal note being worth more than a blue seal is high. High denomination blue seal notes can also be incredibly difficult to track down as the higher denomination national banknotes were printed a lot less frequently.

The fourth and final type of national currency was printed for the series of 1929. Every national bill from 1929 is small size, meaning the same size as the bills in our wallets. These are almost all common and not worth any considerable amount of money. Don’t let that discourage you though, we’ve paid thousands of dollars for small size nationals before, it really depends on the bank which issued the bills. Combine that with a great condition bill and you have a valuable national bank note.

I have a National Banknote, how do I sell it?

Consider us the number one buyer when it comes to buying all types of national currency banknotes. We don’t have high overhead costs of a brick-and-mortar shop, or a giant corporation with many employees. We’re a small family-owned business, which allows us to pay a lot more money than our competition. Contact us today.