Every bill from this currency-issuing bank should be dated 1862. The bank was originally named The Agra & Masterman’s Bank LTD, a few years later in 1865 it changed its name to what we see on the banknotes today: Agra & United Service Bank Limited. Unfortunately a year later in 1866 the bank failed.

These notes were only printed in a few denominations, all of which were high: $100, $200, $300 and $500. Some of the one hundred dollar denomination notes from this bank are known to exist, the other higher denominations were likely redeemed and destroyed. If you think about it, most people in the late 1860s weren’t holding on to THIS much money as a “collectible.” This is part of the reason these bank notes are so incredibly difficult to come by. If you have a Hong Kong banknote from Agra & United Service Bank Limited, contact us today as we’re very interested buyers of this type of paper money. 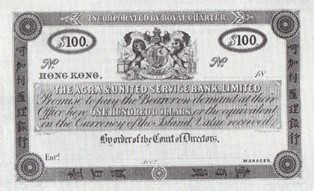 Looking to sell your old Hong Kong banknotes? We are the top buyers of Agra & United Service Bank Limited paper money notes in the country. You will want to hear our offer before you make your decision on selling your banknotes. I think you may be surprised by how much we offer. Send us clear photos of the front and back of your old Hong Kong notes and we will get back to you within 24 hours.